A very large retail company came to Mainway with parts in hand to install in there 434’ long, 30 sort lane sorter. This included the full length of chain (~2000 feet), and many wearable items. The system is roughly 15 years old, but sorts through thousands of packages a day. When we took our first look inside the sorter prior to commencing the work we realized that the sorter was in poorer shape than was originally thought. We discovered that a full replacement of the worn-out extruded aluminum chain support rails was required. After about 2 months of weekend-only work the sorter is now sorting dependably and running well again.

*The noise levels have been noted by many to be significantly lower than before we began our work. 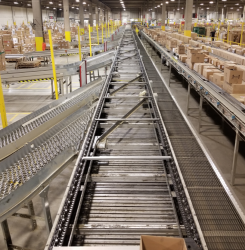